Testimonial: “I highly recommend the Law Offices of David P. Sheldon for all of your military legal needs.”

Mr. Sheldon and his team were great right from the start. He laid out a knowledgeable plan of defense with a course of action that was born out of experience, with every intention of leveling the playing field to get to a fair result. I was caught up in a broken system filled with bias, privilege, and presumption. He was the voice that I needed in order to be heard and given even a chance of receiving some sort of justice. His advice and legal council brought peace and reassurance throughout the process and a result that could not have been achieved otherwise. I highly recommend the Law Offices of David P. Sheldon for all of your military legal needs as a very resourceful, informed, and experienced high powered firm that has a personal touch of immediate availability and response time. He will genuinely fight on your behalf and is an outstanding advocate to have by your side no matter what the charge or accusation. I was facing a command that was trying to end my career and ruin my record over contradictory instructions and technicalities that were being applied maliciously in an unequal fashion, but instead I am being allowed to remain in service to eventually retire as planned. I am extremely grateful for Mr. Sheldon and his team.

The 2022 Symposium will be the 55th annual meeting of the nation’s top Federal, Tribal, State and Local public health providers, administrators and emergency responders/planners.

This event is the only annual meeting dedicated exclusively to the work of U.S. Public Health Service Commissioned Corps officers.  Attendance strengthens the nation’s public health and emergency response capability, while building relationships that will further the mission and objectives of agencies  and provides specific education and training based on specialty. The 2022 Symposium is the 55th annual meeting of the nation’s top Federal, Tribal, State and Local public health providers, administrators and emergency responders/planners.

Event details are located at: https://www.phscof.org/symposium/ 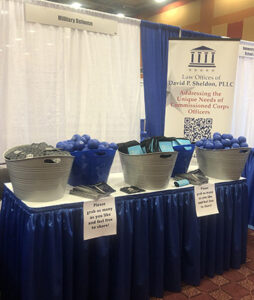 Military Defense is a Sponsor at the PHS Symposium in Phoenix May 24-26, 2022.
Please stop by the Military Defense booth and pick up some medical kits, stress balls and luggage wraps.
Congratulations to COA PHS for a successful 2022 conference.

“The cadet planning to commission into the Army nearly lost his chance to become an officer. After he graduated from VMI in May 2020, the U.S. Army Cadet Command initiated disenrollment proceedings against him after learning about the lawsuit in a Post article, said his lawyer, David Sheldon.”

“Eventually, after a hearing in which the VMI graduate acknowledged his wrongdoing, the Army made its ruling, Sheldon said. He could become an officer.”

“At the hearing, the Marine colonel in charge reads Hartnett’s record; and he says, here we have a promising young Marine until 1991. And then, the colonel asks, what happened? David Sheldon – the lawyer – says that’s the question no one had ever bothered to ask.

SHELDON: He could hear a pin drop in that room when he was describing the trauma that he had went through, and how it impacted upon him.”

David P. Sheldon interview with Terace Garnier on penalties military personnel face by not following the government’s mandate on vaccination for COVID-19.